A total of 120 Kenyans who were recently evacuated from Garowe area in Somalia have been quarantined at the Kenya Medical Training (KMTC) College in Nairobi.

The Kenyans who arrived at the Jomo Kenyatta International Airport (JKIA) on Thursday evening were picked and shuttled to the facility as soon as the plane touched down at 8:30 pm.

The Ministry of Health coordinated the pick-up and other logistics in the quarantine facility.

“We are in the government quarantine facility at KMTC in Nairobi. At least now we are in our mother country. We can enjoy despite being cashless, we are safe,” an evacuee told the Star on Friday.

A majority of those evacuated were teachers in private schools in Somalia.

The 53 teachers said that they were stuck in Garowe after their employer confiscated their travel documents and remained adamant on their request to pay for their flight to Nairobi.

The teachers taught at Yamays, Dawaad, and Rasasyr international schools in Galkayo, Garowe, and Bosaso.

A week ago, a Kenyan teacher in Garowe painted a grim image of how hard it was for them to remain in Somalia amid the pandemic and cruelty by their employer, one Ahmed Ali.

Ali has several private schools in Garowe and other places in Somalia.

“I am a teacher working under a private school owned by Dr Ahmed Ali. I am in Garowe town in Somalia among other over 40 teachers, our contract ended though we were never paid one month salary despite having worked for it,” one of the teachers opined.

He said that Ali confiscated their travel documents and took off rendering them helpless. He added that they were never paid their one-month salary of Sh20,000.

Through the intervention of Kenyan Ambassador to Somalia Lucas Tumbo, Ali was forced to return the travel documents to the Kenyan teachers.

They were later processed and shuttled back to Kenya by a Daallo-owned plane.

They will be quarantined for 14 days. Should they test negative for COVID-19, they will be released to go home.

If they test positive, they will be moved to isolation in designated hospitals. 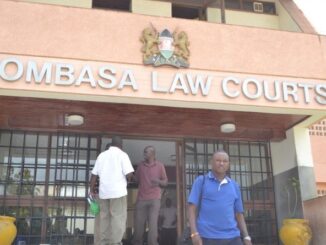 7 Kenyans stranded in Somalia sue government for denying them entry