A Thursday ruling by Anti-corruption Chief Magistrate Elizabeth Juma jailing Sirisia MP John Waluke to 10 years or pay a fine of over Ksh1 billion is nothing short of a landmark ruling.

Waluke who was sentenced together with Grace Sarapay Wakhungu through their company Erad Supplies and General Contractors defrauded the National Cereals and Produce Board Ksh237 million for supplying “air”.

Juma’s is Kenya’s first severest ruling to corruption offenders. Many say this is long overdue.

What’s baffling, nonetheless, is how Waluke, a retired Major-General distributed the cash in a record of two days through a proxy.

His intricate deep web of conniving business personalities showed just how corruption is entrenched on the Kenyan system.

A trail of how the money was disbursed courtesy of Citizen TV showed that the monies ended up just a few individual pockets.

In March 2013, Erad Supplies & General Contracts Limited invoiced the National NCPB for payments of what it termed as storage of maize in its stores on behalf of NCPB.

However, it emerged that the invoices were forged to get Ksh297 million from NCPB.

As soon as NCPB paid the amount to KCB Kencom branch, it was quickly wired to a Barclays Bank account registered under Soita & Saende Advocates.

The funds were later wired to various clients in two days.

A sizeable amount was wired to various law firms including one owned by former Deputy Chief Justice Nancy Barasa which got Ksh5 million as legal fees.

Three cheque withdrawals totalling to Ksh16 millions were made but none of the beneficiaries were stated.

A further Ksh40 million was sent to an accomplice of Wakhungu by Soita & Saende Advocates.

Waluke got Ksh50 million from the Soita & Saende Advocates after masterminding the grand heist.

An individual who has not been named by the court got Ksh112 million from the whole heist according to the money trail.

EACC detectives flew to South Africa to investigate the origin of a purported South African-based firm which had issued the Ksh297 million invoice that almost drained NCPB’s coffers.

Waluke and his team had alleged that M/s Chelsea Freight, a South African based firm in Durban Kwa-Zulu Natal procured and offered storage facilities for millions of bags of maize.

However, two directors of the company told EACC detectives that they had no links to Erad Supplies adding that they do not own a warehouse nor deal in procurement of maize.

EACC is now expected to go after the other racketeers involved in the heist going forward. 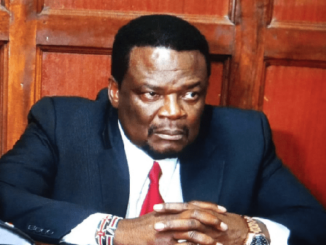