Grace Wakhungu who was jailed for 67 years in June over corruption-related charges could secure her freedom soon after raising Ksh800 million fine.

Wakhungu who is sister to retired Vice President Moody Awori, was sentenced alongside Sirisia MP John Waluke for defrauding the National Cereals and Produce Board (NCPB) Sh297 million in 2009.

According to the People Daily, the larger Awori family has managed to raise the amount in just one month.

She is the mother to Kenyan Ambassador to France Amb Judy Wakhungu who is a former Cabinet Secretary for Environment and Natural Resources.

She has been incarcerated at the Lang’ata Women Prison awaiting a ruling on her application to be released on bond set for Friday, August 7.

Wakhungu’s family in Kenya and Uganda boasts of affluence and since her incarceration, a network was quickly formed to raise the fine.

“In fact, we outdid ourselves by raising close to Sh800 million, being contributions from family members through the sale of assets locally and abroad, personal savings and ‘silent’ funds drives by friends,” the source who requested for anonymity said.

“If you were to follow the law and say that Grace received Sh40 million, then the maximum fine should be Sh80 million, not the figures they are bandying around,” Muite said.

But as Wakhungu readies for release, her co-accused, Waluke isn’t lucky with his family only managing to raise Ksh250 million so far.

One of Waluke’s family members who asked not to be named said that raising a similar fine for him has become a daunting task.

The family member explained that government agencies have threatened to track the source of money for anyone who bails him out or sources from which the money to free him are solicited.

Waluke’s lawyer Sam Nyaberi said that in light of this, they have applied for bond.

“We are waiting to be heard on August 7, since we filed the application under certificate of urgency we expect to have directions soon,” stated the lawyer.

However, he said that he is yet to be furnished with the proceedings of the case which means that his client could suffer prejudice and stay longer in jail.

The two families have now allayed fears saying that the DPP, EACC and KRA have threatened to come after them after raising the funds to secure their kin’s release. 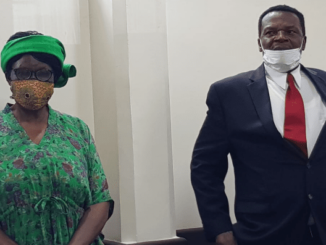