The Kenyan government has exempted Tanzanian nationals arriving in Kenya from a mandatory 14-day quarantine imposed earlier when international flights resumed on August 1.

Kenyan flagged Tanzania as a high-risk area in regard to COVID-19 thereby imposing the mandatory quarantine on Tanzanian travellers to Kenya the fact that they could be COVID-19 negative notwithstanding.

In the latest review by the Ministry of Health in collaboration with the Kenya Civil Aviation Authority (KCAA), Tanzania was included among 146 other countries allowed to enter Kenya without being subjected to mandatory quarantine.

The Tanzanian Civil Aviation Authority (TCAA) said this was a reciprocal move following Kenya’s stringent implementation of COVID-19 measures which left out Tanzania in the mandatory quarantine list.

First, TCAA banned Kenya Airways from its airspace and later added Air Kenya Express, Safarilink and Fly540 into its list.

Kibe said that Tanzanian official walked out of the negotiations.

However, on Wednesday, Tanzania Civil Aviation Authority (TCAA) in a statement said that Kenyan airlines can resume operations in Tanzania.

“The resumption and restoration of flights for all Kenyan operators namely Kenya Airways, Fly 540 Limited, Safarilink Aviation and Airkenya Express Limited is with immediate effect.”

The row had threatened the tourism sector adversely especially during the Great Migration in Maasai Mara.

An estimated two million wildebeest crossover to the Serengeti in Tanzania between July and early October in what has been touted as the ‘World’s Seventh Wonder’. 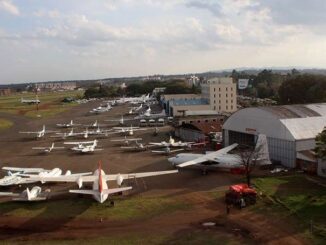