Kenyan biking couple Dos and Wamuyu Kariuki are hopeful that they will resume their globe-trotting adventure once the pandemic is over.

The couple who had since 2018 been travelling across the world in their classic German bikes had to spend four and a half months in Nicaragua when COVID-19 pandemic struck hard.

The Kariuki’s were headed to North America via the picturesque Panama. Little did they know that the pandemic would cut short their trip.

They returned to the country in August when Kenya lifted a ban on international flights. They finally ‘reunited’ with their German machines which they had to ship from Nicaragua.

Before the pandemic struck, they had already visited there continents – Africa, South America and Antarctica.

Wamuyu, 45, told the Standard recently that “it is unlike Africans to travel and take that kind of an adventure… It is basically done by Westerners.”

She said that she is testament one can travel across Europe with an African passport.

“There is always this belief that it is very difficult to travel as an African and using our passports because they are not as strong as the American and European ones. We have been able to prove that it is possible,” she said.

Both Wamuyu and Kariuki quit their jobs in 2018 shortly after walking the isle and took their vows. 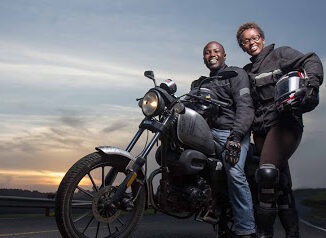