Bobi Wine is seeking to unseat Museveni who has ruled Uganda for more than three decades.

Throughout the campaign trail, 28 deaths from Bobi Wine’s camp have been reported.

Police have in most cases shot his guards or campaigners.

Wary of the aftermath of the elections where Museveni has been predicted to win, Kenyans operating businesses and living in Kampala have closed shop.

The exodus back to Kenya began on Tuesday.

A Ugandan landlord in Kampala told the Standard that six of his bedsitter units rented to Kenyans are now empty.

“All six bedsitter houses are now empty. The tenants took away everything they own, meaning they might not be coming back anytime soon,” he said.

One of the Kenyans said that the brutal force exhibited by security agencies in the campaign trail is a cause for concern on their safety.

“Security agents have been brutal and lives have been lost since November in confrontations involving police and opposition supporters.

“I have made up my mind to leave because we fear the situation could worsen,” stated one Kenyan planning to leave the country.

Four Kenyan activists were on Wednesday arrested outside the Ugandan Embassy in Nairobi even before they issued a statement on the state of elections in Uganda.

Museveni who has ruled Uganda for 34 years has since lost his allure. He has lost sizeable support from regions which previously supported him.

Bobi Wine, a self-declared “ghetto President” wormed his way into the hearts of younger voters who believe that only he can save them from the tyrannical rule of Museveni.

Ugandan youth have walked off Museveni’s agenda of providing water, dairy plants, improving infrastructure among others.

They say that while this was appealing in yesteryears, moreso to their parents, they are more concerned by the rate of unemployment and poverty among them.

Also, they opine that if this is not addressed by a different administration, Uganda will be headed to an abyss.

Bobi Wine has said that he will only accept defeat if the election is free, fair and void of rigging. 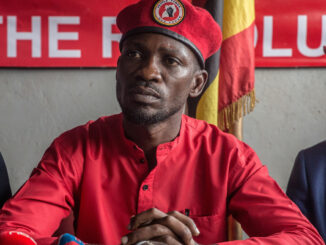