Kenyans in Sweden made a surprise visit to Kenyan football legend, Eric Ouma who has been playing for Harambee Stars as a defender but recently sustained a fibula fracture while training in Sweden.

Ouma popularly-known as ‘Marcelo’ plays for Swedish top-tier side AIK Football club. He was in training when the accident happened four weeks ago. He was hospitalized and later discharged to recuperate at home.

He is now recuperating although his leg is on a cast which is not going off any time soon.

Bonface Osano, one of the Kenyans living in Sweden shared photos of him and a group of other Kenyans during the Friday visit.

“A group of Kenyans residing in Sweden visited recuperating Harambee Stars and AIK Fotboll (sic) defender Eric “Marcelo” Ouma. Ouma was injured in training 4weeks ago,” he captioned the tweet.

Besides playing for Kenya’s national team, Ouma is a former Gor Mahia talisman.

With his injury, he will miss out AIK’s first few matches of the season although he has resumed light training as he awaits full recovery.

AIK has so far played two matches in three fixtures which have they won. They are in the third position in the Swedish league. 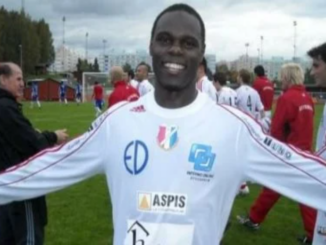