Police in Thika are yet to establish the whereabouts of Thika business businessman-cum-millionaire Julius Gitau after disappearing on September 21.

The businessman who is popularly known as Gitau wa Mali is reportedly said to have left his business premises, a general wholesaler shop in Thika town for Ngoingwa where he said he would be for gym sessions.

He left on one of his lorries but 30 minutes later, called his driver to pick up the lorry at Blue Post Hotel.

The driver, Geoffrey Wachira is the brother to his second wife.

When Wachira got to Blue Post, he found Gitau’s phone, keys and note on the vehicle’s dashboard and has not been seen since then.

Gitau, known for his industrious nature; climbing from a hawker to one of Thika’s millionaires, he had been complaining of low business and stubbornness by banks whom he owed millions in unpaid loans.

He would often tell his confidants that business was not good at all since the coronavirus pandemic as his sales dropped from Ksh300,000 daily to ksh20,000.

This, he said made it difficult to pay the loans he owed his creditors who were willing to give him a loan holiday on condition he pays double interest.

“He even told me how his cash flow had gone down, from around Sh300,000 a day to less than Sh20,000,” Kiambu County Business Community chairman Alfred Wanyoike told the Nation.

“He was saying banks and other creditors were on his neck. Gitau’s main complaint was that financial institutions were promising to give him credit servicing holidays on condition that he accepts to pay double interest,” he added.

Police are now trying to decipher if or not it was Gitau’s handwriting in the note found in the vehicle stating that “Kwa familia yangu, nimechoka na mashida ya maisha. Najitupa kwa mto (to my family, I am tired of problems. I am jumping into a river).”

Police reports said that on the morning of the incident, he left his home in Maporomoko escorted by his second wife. He boarded a matatu to Thika town but what was more intriguing is that he has to use public means because he had no money to fuel his vehicles which he often used to and from home.

Gitau who joined the millionaires club 10 years after hawking in Thika has three wives and 11 children.

Since his missing nine days ago, Gatanga Police Boss Peter Mucheru who is handling the investigation said that is unlikely that Gitau threw himself in the river.

“We have the suicide note, which will be subjected to forensic analysis. We are also looking at his call history. We want to know if indeed it is Mr Gitau who called his driver to get the lorry from Blue Post,” he said.

His family is still optimistic that they will find him safe and sound. 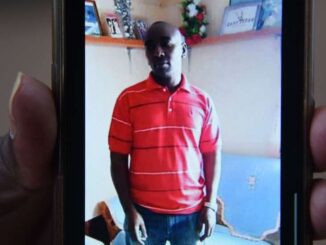 Investigations into Thika businessman disappearance show he was a ’poor millionaire’