For Lydia Wangui who hails from Muruguru, Nyeri County, the arrest of Rwandan genocide mastermind Felicien Kabuga will put heart to rest after a painful 17 years of untold suffering.

Munuhe who had been working as a freelance journalist was a close link to the Rwandan fugitive who the Federal Bureau of Investigation (FBI) was in hot pursuit of back in 2003.

He was murdered in his house a few days before he could lay a trap for Kabuga.

With Kabuga’s arrest over the weekend in France more than two decades after the genocide and 17 years since Munuhe’s murder, Wangui is finally at ease.

“I could not believe it when I heard that he has been arrested. But the pain is still fresh in my heart. I suffered for a very long time and I continue to feel the pain of having to bury my child. Now it is his turn to suffer,” she told Daily Nation.

Wangui says for the last 17 years, the journey to seek justice for her son has been daunting, betrayal, lies and frustration taking centre stage.

She recounts that officers from the then Criminal Investigations Department (CID) broke the news of her son’s death in 2003 only telling them that he died after inhaling carbon monoxide.

“When we went to his house in Karen, they did not even want us to get in. But I demanded to see for myself where he had died. They had already taken the body away,” she recounts.

However, she says upon visiting his late son’s house, there were footprints all over the house with a bloody scene describing his bedroom.

“There was a lot of blood on the floor and the bed was broken. All I could think of is how my son suffered a painful death,” she recalls.

Josephat Mureithi, Munuhe’s brother who identified his body at the City Mortuary says that his brother’s face had been disfigured by acid burns.

Before Kabga’s arrest, Mureithii had written to the ICC asking the Hague-based court to investigate the death of his brother.

“I wrote to the ICC and they said that his case would be placed in the archives until new evidence is found. Now is the time to look into the matter,” he said.

For now, Wangui says that “He has caused so much pain to me and I want him to know that he will pay for it. And I know the many other people he caused pain have their own story to tell.” 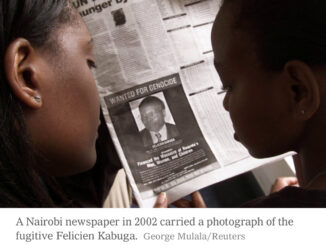