Sara Ikumu was eliminated from Britain’s Got Talent in a shocking public vote that left everyone stunned including the judges.

Sarah, daughter of a Kenyan couple in the UK had automatically qualified for the semi-finals after receiving the Golden Buzzer act from judge Simon Cowell when she impeccably performed And I Am Telling You song by Dreamgirls. (Recap Here)

Simon Cowell looked surprised when the vote was announced and it turned out Ikumu was not going through to the finals.

Pianist Tokio Myers and comedian Ned Woodman qualified to the finals in the third live semi-final show this evening.

Sarah Ikumu had a strong backing from celebrities and fans around the world as well as Kenyans across the globe. She was Jennifer Hudson’s favorite performer and had also received support from the  Kenya High Commission in the UK.  H.E Lazarus O. Amayo, High Commissioner of Kenya to the United Kingdom on Tuesday shared a video on social media mobilizing support for Ikumu.

After the show, Simon Cowell was seen going up on the stage to talk to Sarah. 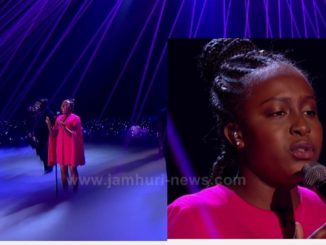 OFF TO THE FINALS!! Sarah Ikumu shines through to the finals of Britain Got Talent after judges’ wildcard vote (Video)