The Somalia Embassy in Nairobi has reopened a decade after it was shut down.

The new development comes after Somalia won a court case where in property dispute.

A Kenyan businessman claimed ownership of the building housing the embassy in Westlands. He said that he had bought it in 1972, a time when Mogadishu was locked in civil war.

Long serving Somali Ambassador in Kenya Mohamoud Ahmed Nur ‘Tarsan’ had been overseeing the renovation of the building for the last two years.

He said that the Somali community in Nairobi raised funds to renovate the embassy.

The embassy with fully furnished offices will now house Somali diplomats who have been working from rented offices in the city.

“I came here as a Minister for Foreign Affairs, when I was just two days into the job, and promised we would reopen it one day,” said Somali Foreign Affairs Minister Ahmed Isse Awad according to Daily Nation.

Awad maintained that the reopening of the embassy is an indication that the ties between Mogadishu and Kenya are stronger and bounded by togetherness.

In the recent past, Kenya and Somlia’s diplomatic relationship has been frosty with each country recalling its envoys as a row simmered.

However, during the reopening of the embassy, several top ranking Kenyan government officials were present and pledged to work together in strengthening the ties of the two countries.

Among them was Foreign Affairs Chief Administrative Secretary Ababu Namwamba who said that “Somalia is back with a bang.”

Namwamba insisted that Kenya cannot “wish away” Somalia because the two countries are united by something bigger than the challenges that face it. 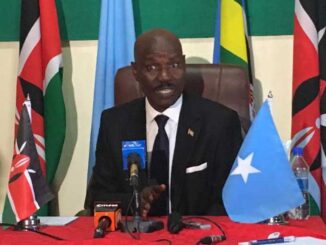