A Kenyan doctor in the UK Francis Githae Muriithi is lamenting strict rules on blood donation which has made it impossible for him to donate blood to his Kenyan wife of seven years.

Dr Githae says due to the nature of the relationship with his wife, he is bound by the British rules and cannot donate the blood unless he meets strict requirements among them forfeiting sex for three months.

According to the Standard, UK’s NHS rules on blood donation stipulates that a sexually active partner who comes from a part of the world where HIV/Aids infection rates are high, he/she cannot donate blood.

In this case, Dr Githae’s African background makes it impossible for him to donate blood because the HIV prevalence in Africa is high.

However, NHS Blood and Transplant said it will review Dr Githae’s case.

Dr Githae who is an obstetrician and gynaecologist in the East Midlands describes his marriage as “monogamous”.

He explained that he has had an HIV test and it was negative and has remained so for the last seven years when he has been in marriage with his Kenyan wife.

However, he said that NHS held that he needs to take another HIV test through the blood donation service and has to abstain from sex for three months.

Dr Githae said that his wife tested negative for HIV through a NHS test conducted while she was pregnant but this test is now inadmissible.

“If you lock out people like me, and then carry on saying African donors are not coming forwards, it will make us look bad when it’s the system not facilitating us. I don’t want to appear to be a troublemaker but the NHS blood donation system needs to change to accommodate more people.

“I’m glad they are reviewing it, they need a more individualised approach,” he stated terming the rules nonsensical.

He said that with such rules, it makes it harder for black donors to donate blood.

Su Brailsford, an NHS consultant, said the rules on blood donors who can donate and who cannot donate blood is premised on expert advise to “minimize risks to the recipients”.

Nonetheless, she noted that: “We recognise that a more individualised risk assessment approach could allow more people (like Dr Muriithi) to donate safely.

“We are planning a detailed review of this policy which we hope to begin before the end of the year.” 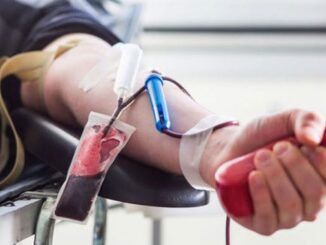