When he set out on imparting knowledge on fellow Kenyans at Kenyatta University, Prof Steven Runo knew not that he would one day be a part of aggressive practical research that would end in a global prize under his belt.

Having intriguing knowledge of molecular biology, he used this to develop a technology whereby plant nutrients kill parasites in drought-resistant crops such as sorghum and millet and staple food such as maize in Kenya.

Prof Runo was a common figure in sorghum and millet fields in Nyanza and Western Kenya where these crops are grown on large scale.

He won the prestigious award which means he is Ksh2.4 million richer.

“The Royal Society Africa Prize 2020 is awarded to Dr Steven Runo for elucidating pathways for long distance RNA trafficking between parasitic plants and their hosts and identifying and developing transgenic protocol for characterising and validating candidate host and parasite genes,” the Society said in a statement.

He will also receive a bronze medal besides the cash award in British pounds later this year in London.

His practical research proved that it is possible to kill parasites attacking these crops and also keep at bay diseases such as Striga in sorghum and millet as well as weeds affecting major crops such as maize.

In his extensive research, he studied the type of nutrients that Striga feeds on and came up with a different set of nutrients which were poisonous for purposes of killing the parasite.

He said that his research was aimed at promoting food security by addressing challenges that major crops within the country are faced with which includes fighting parasites.

“What we do is gene editing, where we study the nutrients that parasitic plants like Striga suck from the host plants and from that, we develop similar biological nutrients, inject them in the host crops and ultimately kill the parasites,” explained Prof Runo.

“The overall objective of our research is to achieve food security…My interest is to support farmers and ensure they get value from their sweat,” he adds. 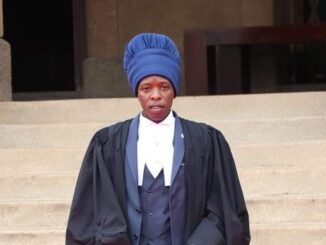