About 23 million Kenyans are living in poverty, a new report released by the Kenya National Bureau of Statistics (KNBS) indicates.

It cited that approximately 15.9 million Kenyan are no longer able to raise Ksh6,000 to pay their monthly rent.

It classified one out of three Kenyans in the 15.9 million bracket (36 percent) as monetary poor. This means that they make between Ksh3,252 and Ksh5,995 every month.

This figure is for those in rural and urban centres.

The report described 23 million Kenyans as “multi-dimensionally poor” citing that they are bound to lack at least three basic needs and services.
The report highlighted that among the basics that they could lack are education, shelter and key economic activities.

KNBS indicated that multidimensional poverty is higher in rural areas at 67 percent while in urban centres, it is at 27%.

Turkana, Kakamega, Kilifi, Mandera and Kitui counties were ranked as those having a high number of Kenyans poor in both monetary and multidimensional terms.

Ukur Yatani, the Treasury CS said that this data should be used to guide policies in the revenue sharing formula.

“The findings should be used in the budget planning processes to enhance equality. Many of the indicators generated are useful for result-based monitoring frameworks and could assist to focus interventions on the most vulnerable” he said.

Senators have divided over the best formula to pass as counties call for a better sharing formula that does not marginalize some counties.

A special sitting is scheduled for Tuesday afternoon where a win-win formula for all counties is expected to be debated and passed.

The impasse has threatened to cripple operations in the counties due to lack of funds. 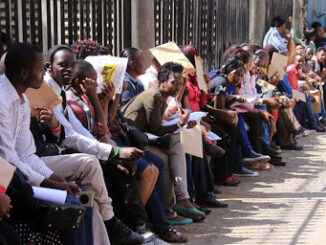